Goldfinger is a 1964 spy film and the third installment in the James Bond series produced by Eon Productions, starring Sean Connery as the fictional MI6 agent James Bond. It is based on the 1959 novel of the same name by Ian Fleming. The film also stars Honor Blackman as Bond girl Pussy Galore and Gert Fröbe as the title character Auric Goldfinger, along with Shirley Eaton as the iconic Bond girl Jill Masterson. Goldfinger was produced by Albert R. Broccoli and Harry Saltzman and was the first of four Bond films directed by Guy Hamilton.The film's plot has Bond investigating gold smuggling by gold magnate Auric Goldfinger and eventually uncovering Goldfinger's plans to contaminate the United States Bullion Depository at Fort Knox. Goldfinger was the first Bond blockbuster, with a budget equal to that of the two preceding films combined. Principal photography took place from January to July 1964 in the United Kingdom, Switzerland and the United States.Goldfinger was heralded as the film in the franchise where James Bond "comes into focus". Its release led to a number of promotional licensed tie-in items, including a toy Aston Martin DB5 car from Corgi Toys which became the biggest selling toy of 1964. The promotion also included an image of gold-painted Eaton on the cover of Life.Many of the elements introduced in the film appeared in many of the later James Bond films, such as the extensive use of technology and gadgets by Bond, an extensive pre-credits sequence that stood largely alone from the main storyline, multiple foreign locales and tongue-in-cheek humour. Goldfinger was the first Bond film to win an Oscar (for Best Sound Editing) and opened to largely favourable critical reception. The film was a financial success, recouping its budget in two weeks and grossing over $120 million worldwide. The LP has been autographed on the back cover by Sean Connery with a fountain pen in green and Desmond Llewelyn with a fountain pen in black........CONDITION OF VINYL, COVER AND AUTOGRAPHS IS VG PLUS. 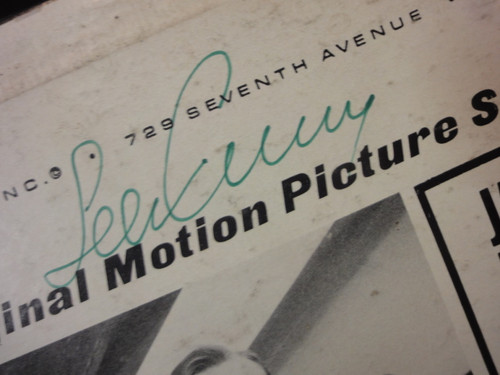