This item is a 14" X 21" color lithograph photo centerfold from the April 10,1949 edition of The New York Sunday News Newspaper. Please note-this is the centerfold photo only-there is no complete newspaper magazine. The centerfold color lithograph photo features a scene from the 1949 Arthur Miller Play-"death of A Salesman" starring Lee J. Cobb.Death of a Salesman is a 1949 play by American playwright Arthur Miller and is a classic of American theater. The play ran for 742 performances, directed by Elia Kazan with Lee J. Cobb starring in the leading role. Death of a Salesman made both Arthur Miller and the character Willy Loman household names. The play raises a counterexample to Aristotle's characterization of tragedy as the downfall of a great man: though Loman certainly has Hamartia, a tragic flaw or error, his downfall is that of an ordinary man (a "low man"). Like Sophocles' Oedipus in Oedipus the King, Loman's flaw comes down to a lack of self-knowledge; unlike Oedipus, Loman's downfall threatens not the city but only a single, bourgeois household.The color lithograph photo has been autographed on the front by Lee J. Cobb with a fountain pen in black........BOTH PHOTO AND AUTOGRAPH ARE IN VERY GOOD CONDITION.......... 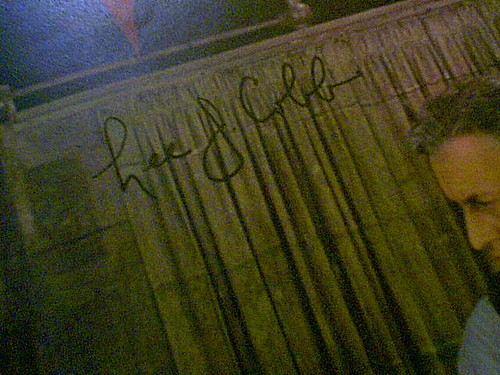