This item is an 8" X 10",color photo of Kevin Costner in a scene from the 1987 Movie-"The Untouchables".The Untouchables is a 1987 American crime-drama film directed by Brian De Palma and written by David Mamet. Based on the book The Untouchables, the film stars Kevin Costner as government agent Eliot Ness. It also stars Robert De Niro as gang leader Al Capone and Sean Connery as Irish-American officer Jimmy Malone. The film follows Ness' autobiographical account of his efforts to bring Capone to justice during the Prohibition era. The Untouchables was released on June 3, 1987, and received positive reviews. Observers praised the film for its approach, as well as its direction. The film was also a financial success, grossing $76 million domestically. The Untouchables was nominated for four Academy Awards, of which Connery received one for Best Supporting Actor.he color photo has been autographed on the front by Kevin Costner.......BOTH PHOTO AND AUTOGRAPH ARE IN VERY GOOD CONDITION. 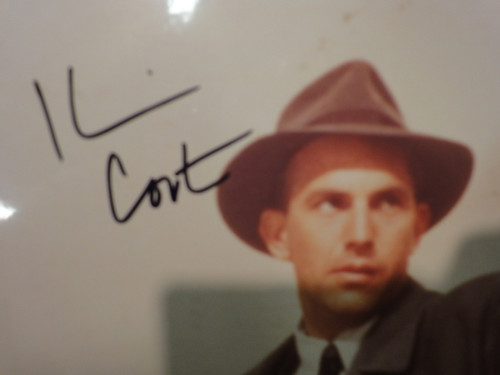