This item is an 8" X 10 111/2",black and white lithograph of Julian Cope.Julian Cope (born Julian David Cope, on 21 October 1957) is a British rock musician, author, antiquary, musicologist, poet and cultural commentator. Originally coming to prominence in 1978 as the singer and songwriter in Liverpool post-punk band The Teardrop Explodes, he has followed a solo career since 1983 and initiated musical side projects such as Queen Elizabeth, Brain Donor and Black Sheep. Additional to his own work as a musician, Cope remains an avid champion of obscure and underground music.Cope is also a recognised authority on Neolithic culture, an outspoken political and cultural activist, and a fierce critic of contemporary Western society (with a noted and public interest in occultism, paganism and Goddess worship).As an author and commentator, he has written two successive volumes of autobiography called Head-On (1994) and Repossessed (1999); two volumes of archaeology called The Modern Antiquarian (1998) and The Megalithic European (2004); and three volumes of musicology called Krautrocksampler (1995), Japrocksampler (2007) and Detroitrocksampler.The liithograph photo has been autographed on the front by Julian Cope...............BOTH PHOTO AND AUTOGRAPH ARE IN VERY GOOD CONDITION. 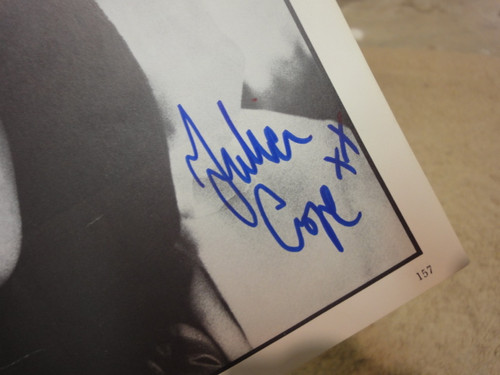