This item is a 9 1/2" X 12",black and white,lithograph candid photo of Judy Collins.Singer Judy Collins was, along with Joan Baez, one of the two major interpretive singers to emerge from the folk revival of the late '50s and early ‘60s. Like Baez, she began singing traditional folk songs, then moved on to popularize the work of contemporary singer/songwriters, even writing her own songs occasionally. Unlike Baez, she used her classical music training to evolve into being a singer of art songs and show tunes, sometimes employing semi-classical arrangements. In a career that began at the end of the 1950s and was still going strong more than 50 years later, she consistently performed 50-80 concerts a year, and she recorded extensively, her commercial success reaching its apex from the late ‘60s to the mid-‘70s, as six of her albums from the period achieved gold or platinum sales. Although she was primarily an albums artist, she also enjoyed a few hit singles, notably her Top Ten, Grammy-winning cover of Joni Mitchell's "Both Sides Now," which helped establish Mitchell as a songwriter; an a cappella version of the hymn "Amazing Grace"; and the show tune "Send in the Clowns," which led to a Song of the Year Grammy for its composer, Stephen Sondheim. The lithograph photo has been autographed on the front by Judy Collins............BOTH PHOTO AND AUTOGRAPH ARE IN VERY GOOD CONDITION. 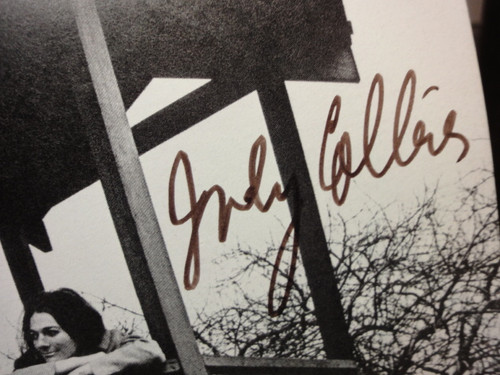