This item is a 7 1/2" X 10",black and white lithograph photo of actor Joseph Cotten. The back of the photo has a biography on Joseph Cotten and mentions his latest film-the 1944 United Artists Movie-"I'll Be Seeing You".Ginger Rogers gives a dramatic performance in this moving romantic drama in which a woman named Mary Marshall, who was convicted of manslaughter (she defended herself when her lecherous boss attempted to rape her and she accidentally killed him), is granted a ten-day furlough for Christmas to visit relatives. Once out, she encounters a shell-shocked vet (Joseph Cotten) on leave from the VA psych ward on a train. The unstable vet has been allowed out by his doctors to see if he is ready to function in normal society. At first, the vet is nervous around Mary, but something clicks and she invites him to stay at her house during their respective breaks. Together they attempt to have a happy Christmas while dealing with the vet's problems. At first Mary keeps her own past and troubles to herself, but as they begin falling in love, she decides to tell him the whole story. In this way, the two reconcile their pasts and move closer toward forming a relationship.The lithograph photo has been autographed on the front by Joseph Cotten with a fountain pen in blue..................BOTH PHOTO AND AUTOGRAPH ARE IN EXCELLENT CONDITION........... 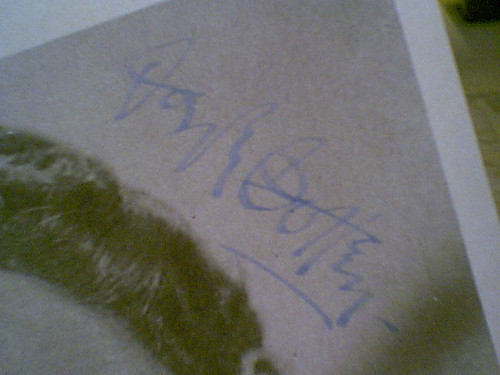