John Coltrane(Impulse A 66)-"Crescent"-LP. Tracklist Crescent 8:40 Wise One 9:01 Bessie's Blues 3:30 Lonnie's Lament 11:42 The Drum ThingCrescent is a 1964 studio album by jazz musician John Coltrane, released by Impulse! as A-66. Alongside Coltrane on tenor saxophone, the album features McCoy Tyner (piano), Jimmy Garrison (double bass) and Elvin Jones (drums) playing original Coltrane compositions. Coltrane does not solo at all on side two of the original LP; the ballad "Lonnie's Lament" instead features a long bass solo by Garrison. The album's closing track is an improvisational feature for Jones (with spare melodic accompaniment from Coltrane's tenor sax and Garrison's bass at the song's beginning and end): Coltrane continued to explore drum/saxophone duets in live performances with this group and on subsequent recordings such as the posthumously released Interstellar Space (with Rashied Ali).A hand signed cut signature by John Coltrane with a fountain pen in black has been affixed to the front cover of the LP. The cut signature portion is approximately 1" X 3".................CONDITION OF VINYL,COVER AND AUTOGRAPH IS VG. 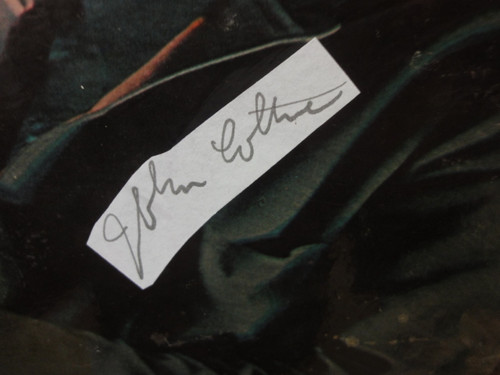