THIS IS AN AUTHENTICALLY AUTOGRAPHED LP BY JERRY COLONNA.. JERRY COLONNA(BRAVO K 142)ENTERTAINS AT YOUR PARTY. FRONT PHOTO COVER IS SIGNED BY JERRY COLONNA. TRACKS:BALLING THE JACK, WALTZ ME AROUND, AUGUST IN AZUSA, US MOON, THREE TREES, BIG FAT MINNIE, BOWSER, I LIKE YOU LIKE?, COFFEE BREAK, CAME TO SAY GOODBYE. CONDITION OF THE VINYL,COVER, AND AUTOGRAPH IS VG. Jerry Colonna (b. Gerardo Luigi Colonna, September 17, 1904- November 21, 1986) was an Italian-American comedian, singer and songwriter, remembered best as the zaniest Bob Hope sidekick on Hope's popular radio shows and films of the 1940s and 1950s. Known for his pop-eyed facial expressions and walrus-sized handlebar mustache, Colonna was known for singing loudly, "in a comic caterwaul," according to Raised on Radio author Gerald Nachman, for dropping the tagline "Who's Yehudi?" after many an old joke, even if it had nothing to do with the joke (believed to be named for violin virtuoso Yehudi Menuhin, the search for Yehudi became a running gag on the Hope show), and for playing a range of nitwitted characters the best remembered of which was the moronic professor. "Colonna brought a whacked-out touch to Hope's show", Nachman wrote. "In a typical exchange, Hope asks, 'Professor, did you plant the bomb in the embassy like I told you?', to which Colonna replied, in that whooping five-alarm voice, 'Embassy? Great Scott, I thought you said NBC!" Colonna's career actually began musically: he had been a trombonist with the CBS house orchestra, the Columbia Symphony, in the 1930s---developing a reputation for prankishness (his off-stage antics were so infamous that CBS nearly fired him on more than one occasion) that inspired Fred Allen, then appearing on CBS, to give him periodic guest slots on his popular radio show., and joined the John Scott Trotter band working on Bing Crosby's Kraft Music Hall radio program a decade later. On one installment, Colonna was included in an opera parody, where he hollered an aria "in a deadpan screech that became his trademark on Bob Hope's show," Nachman noted. Colonna was actually one of three major comic discoveries Kraft Music Hall discovered in the 1940s, the others being pianist-comedian Victor Borge and the Trotter band's drummer, music "depreciationist" Spike Jones. 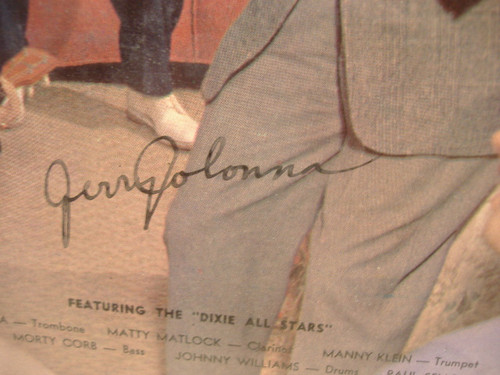