This item is a 6 1/2" X 7 1/2",black and white lithograph photo of actor James Coco.An actor from childhood, the heavy-set, prematurely bald James Coco won an Obie award for his 1959 performance in the off-Broadway The Moon in Yellow River, but his first widespread public attention was gained through his many TV commercial appearances in the early 1960s. He attained Broadway stardom in the offbeat plays of Terence McNally, the best of which was Next, in which Coco portrayed a middle-aged man who through a bureaucratic blunder was ordered to report to his draft board. Playwright Neil Simon was so impressed by Coco that he wrote a stage vehicle for the actor, that dinner-theatre perennial The Last of the Red Hot Lovers. Simon's association with Coco continued through several subsequent plays and into such films as Murder By Death (1975) and The Cheap Detective (1978). Though he'd made his film debut in a bit role in 1964's Ensign Pulver, Coco didn't make an impact in films until after his stage successes; among his more notable starring roles were Sancho Panza in the 1972 film version of Man of La Mancha and the Fatty Arbuckle counterpart in 1975's The Wild Party. Coco starred in two TV series of the 1970s, Calucci's Dept. and The Dumplings, and won an Emmy for a guest shot on a 1983 episode of St. Elsewhere; one of his last TV assignments was as a ne'er-do-well relative on the Tony Danza/Judith Light sitcom Who's The Boss? In his final years, James Coco became as well known for his cooking prowess as his acting achievements, publishing a brace of best-selling cookbooks and--donning chef's hat and apron-- making frequent guest appearances on Hour Magazine and other such TV talkfests. The lithograph photo has been autographed on the front by James Coco.....BOTH PHOTO AND AUTOGRAPH ARE IN VERY GOOD CONDITION. 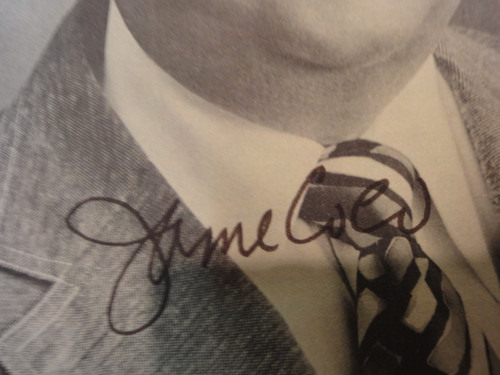