The Ring Magazine-January 1980-80 pages. This vintage boxing magazine-which originally sold for $1.50-features a color cover photo of Howard Cosell plus an article with photos.Cosell, Howard, 192095, American sports broadcaster, b. Winston-Salem, N.C., as Howard William Cohen. Formerly a lawyer, he began covering sports for the American Broadcasting Company (ABC) in 1956, and was identified especially with ABC's prime-time Monday Night Football (197084) and as a vocal advocate for Muhammad Ali. Cosell's often abrasive style, marked by his frequent claims to tell it like it is, made him one of television's most familiar figures.The magazine has been autographed on the front cover by Howard Cosell......BOTH MAGAZINE AND AUTOGRAPH ARE IN VERY GOOD CONDITION. 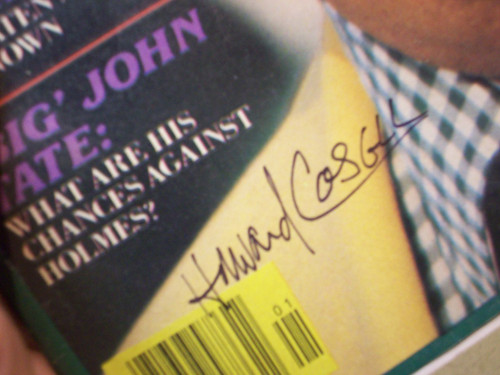