Meyer “Mickey” Harris Cohen was born to a poor family on September 4, 1913 in Brooklyn, New York, but he grew up with his five older siblings in Los Angeles, California. His older brothers ran a drug store during the prohibition era where Mickey learned to make bootleg alcohol. While working with his older brothers, Cohen also began amateur boxing and selling newspapers to earn money. When Cohen turned 15 he ran away to Cleveland to begin boxing professionally. During the Great Depression, Mickey was boxing professionally and working as an enforcer for local mobsters in Cleveland. After creating some trouble there, Cohen was sent to Chicago to work in Al Capone’s Chicago Outfit. He soon began running his own armed robbery crew for the Outfit under Capone’s leadership in prison. After an incident involving a savage assault during an armed robbery gone wrong, Cohen was forced to leave Chicago and moved back home to Los Angeles.When he returned to Los Angeles the Mafioso leaders including Lucky Luciano and Meyer Lansky paired Cohen with Bugsy Siegel. Together the two built a west coast crime syndicate that involved prostitution, narcotics, control of labor unions, and a horse race wire service that controlled gambling on a national scale. In the 1940’s Cohen and Siegel were becoming well known and greatly feared in Los Angeles. In 1947 Siegel was killed by the mob and the west coast syndicate was left in Cohen’s control. With his new status, Mickey hired a private tutor to teach him manners and how to read and write. He used these skills to become friends with high ranking officials and many movie stars. Some of his famous friends included Frank Sinatra, Robert Mitchum, Dean Martin, Jerry Lewis, and Sammy Davis Jr. He became well established as the boss of Los Angeles. Jack Dragna saw Cohen as the biggest threat to his own criminal enterprise and after being disrespected publicly by Cohen a gang war between the two erupted. Cohen avoided multiple attempts on his life, including a house explosion at Cohen’s estate. The violence and dearth eventually caught the attention of local police and the Feds, so they began investigating Cohen and charged him with tax evasion.Cohen was convicted of tax evasion and was sentenced to four years in federal prison in 1951. When he was released in 1955, Cohen quickly returned to running his syndicate in Los Angeles. He also began using blackmail to convince public officials and movie stars to give him money and allow him to continue running his illegal activities in the city. One famous blackmail story that Mickey leaked to the press is the story of Lana Turner and John Stompanato. John Stompanato was killed in Lana Turner’s bedroom and the police ruled it self-defense. Cohen, who was a friend of Stompanato, knew that they were having a sexual relationship so he decided to blackmail her with the information. He eventually released their love letters to the press even after extorting her for money. In 1961 Cohen was once again charged with tax evasion and was sentenced to 15 years in federal prison. He served his first few months in Alcatraz where former mob boss Al Capone also served some time, but was later transferred to Atlanta, Georgia where he was viciously beaten and left partially paralyzed. Cohen was released in 1972 and quickly made headlines for his alleged involvement in the kidnapping of Patty Hearst. Cohen was never officially tied to the crime and eventually passed away at the age of 62 from stomach cancer. The book has been autographed on the title page by Mickey Cohen and has also been autographed on the Carousel Ice Cream Parlor business card on the first page as Michael Cohen............... .........CONDITION OF BOOK,BUSINESS CARD AND AUTOGRAPHS IS EXCELLENT. 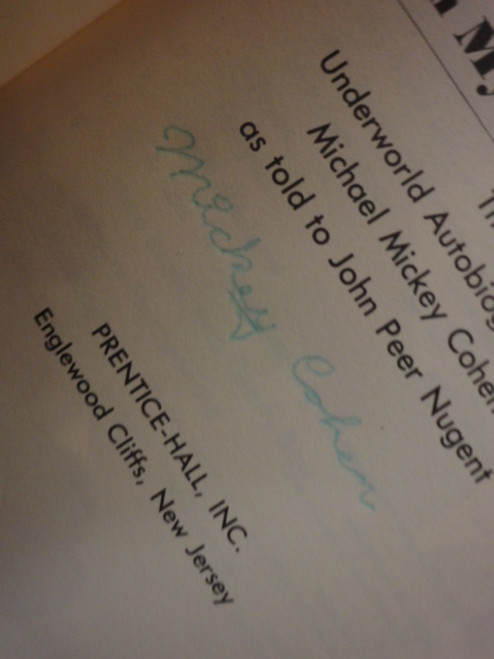