Hans Conried and Alice Pearce with The Creatures And The Frank N. Stein Orchestra(RCA LSP 1923)-"Monster Rally"-LP. This vintage comedy/monster novelty LP was released in 1959 and features a photo of Hans Conried on the back cover. Tracks include-Monster Rally,Flying Saucer,Close The Door,The Dracula Trot,Not Of This Earth,I'm In Love With The Creature From The Black Lagoon,What Do You Hear From The Red Planet Mars,The Thing,Mostly Ghostly,The Purple People Eater,The Invisible Man,Take Us To Your President.As big-time radio began to fade during the late 1940s and early 1950s, Conried concentrated more on film work. He was awarded the starring role in the bizarre musical 5,000 Fingers of Dr. T. (1952), written by his friend Dr. Seuss; unfortunately, the studio, not knowing how to handle this unorthodox project, cut it to ribbons, and the film was a failure. Later he was engaged for a choice co-starring role in Cole Porter's Broadway musical Can Can; in addition, he became a favorite guest on Jack Paar's late-night TV program, popped up frequently and hilariously as a game show contestant, and in 1957 made the first of many special-guest visits as the imperishable Uncle Tonoose on The Danny Thomas Show. Cartoon producers also relied heavily on Conried, notably Walt Disney, who cast the actor as the voice of Captain Hook in the animated feature Peter Pan, and Jay Ward, for whom Conried played Snidely Whiplash on The Bullwinkle Show and Uncle Waldo on Hoppity Hooper. In 1963, Jay Ward hired Conried as the supercilious host of the syndicated comedy series Fractured Flickers. Conried cut down on his TV show appearances in the 1970s and 1980s, preferring to devote his time to stage work; for well over a year, the actor co-starred with Phil Leeds in an Atlanta production of Neil Simon's The Sunshine Boys. The LP has been autographed on the back cover by Hans Conreid with a fountain pen in blue......CONDITION OF VINYL IS USED.CONDITION OF COVER AND AUTOGRAPH IS VG.RECORD IS IN ORIGINAL RCA INNER SLEEVE............... 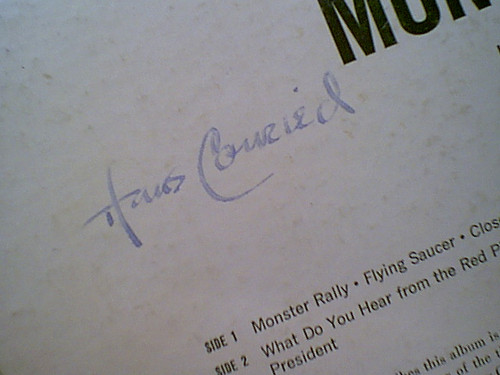