"A Precious Little Thing Called Love"-1928-Remick Music-sheet music. The Shopworn Angel is a 1928 American part-talking romantic drama film directed by Richard Wallace starring Nancy Carroll and Gary Cooper. The film was released by Paramount Pictures in a silent version as well as a sound version using the Movietone sound-on-film system. This film was nearing completion when The Jazz Singer (1927) was released. Dialogue was written for Gary Cooper and Nancy Carroll to compete with "talking pictures". The last scene was a wedding and the only lines of dialogue spoken in the film are Cooper's "I do" and Carroll's "I do". In addition, Carroll is also heard singing the theme song. The sheet music has been autographed on the front cover by Gary Cooper with a fountain pen in blue and Nancy Carroll with a fountain pen in black..................BOTH SHEET MUSIC AND AUTOGRAPHS ARE IN VERY GOOD CONDITION. 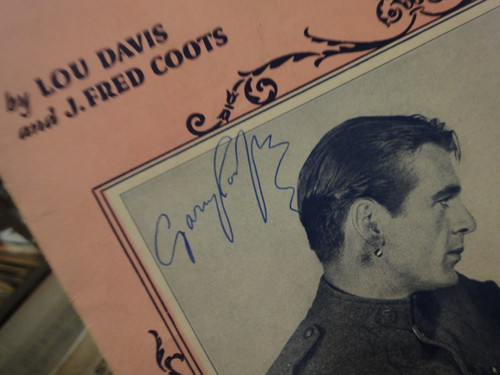