"You And I"-1969-Hastings Music-sheet music. While it might not have been the best idea on earth to remake the 1939 classic Goodbye Mr. Chips as a musical, the end result is not altogether displeasing. Peter O'Toole steps into the old Robert Donat role of Arthur Chipping (originally Charles Chipping), a young by-the-book schoolmaster at a 1920s British boys school who is humanized by the love of good-natured music-hall singer Katherine Bridges (played by Petula Clark; Greer Garson essayed this role, then named Katherine Ellis, in the original). Though Chips must endure the tragedy of Katherine's death during the 1940 London blitz (a scene filmed from the bomb's point of view!), he is able to persevere by devoting himself to his young charges. In retrospect, this version of Goodbye Mr. Chips might have worked better without the songs, which never rise above banality. And though Petula Clark can't match the poignancy of Greer Garson's performance (in all fairness, she didn't have much of a script to work with), Peter O'Toole is terrific as the title character, convincingly ageing and mellowing as the story unfolds.The sheet music has been autographed on the front cover by Peter O'Toole..................BOTH SHEET MUSIC AND AUTOGRAPH ARE IN VERY GOOD CONDITION............... 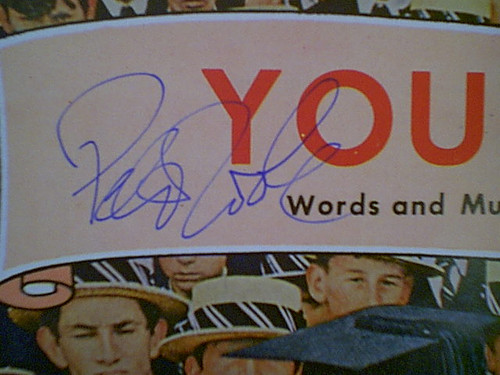