Cleveland, Grover President Congressional Record 1888 "Message From The President Of The United States To The Senate Relative To The Mexican Zona Libre" Government Document Signed Autograph

"Message From The President Of The United States To The Senate Relative To The Mexican Zona Libre"-February 16,1888-6" X 8 1/2"- 152 pages-Signed By Grover Cleveland. This item is a Congressional Record and an original government Senate document for the 50th Congress-First Session-Ex. Document No. 130. .....Stephen Grover Cleveland (March 18, 1837  June 24, 1908) was an American politician and lawyer who served as the 22nd and 24th president of the United States from 1885 to 1889 and from 1893 to 1897. Cleveland is the only president in American history to serve two nonconsecutive terms in office. He won the popular vote for three presidential electionsin 1884, 1888, and 1892and was one of two Democrats (followed by Woodrow Wilson in 1912) to be elected president during the era of Republican presidential domination dating from 1861 to 1933......The Zona Libre, or Free Zone, was a free trade zone in the Mexican state of Tamaulipas along the MexicoUnited States border established in 1858. The goal of Zona Libre was to equalize the imbalanced economic environments that had resulted after the MexicanAmerican War on either side of the Rio Grande River, which had become the international border between the United States and Mexico under the Treaty of Guadalupe-Hidalgo. In January 1885, roughly three decades after the Zona Libre was established, the Mexican government extended the free trade zone along the entire US-Mexican border, which created a zone approximately a thousand miles long and six miles wide. The document has been autographed on the front by Grover Cleveland...................BOTH DOCUMENT AND AUTOGRAPH ARE IN VERY GOOD CONDITION. 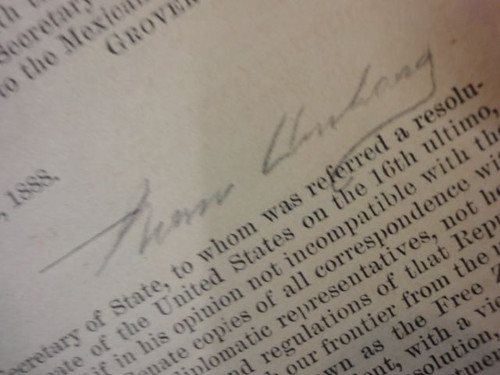 Cleveland, Grover President Congressional Record 1888 "Message From The President Of The United States To The Senate Relative To The Mexican Zona Libre" Government Document Signed Autograph