This item is a 6 1/2" X 12 1/2",color lithograph photograph of actress Glenn Close.An elegant star of stage and screen, Glenn Close is probably best known for her portrayals of villains, from the crazed lover in Fatal Attraction (1987) to Cruella De Vil in the live-action version of 101 Dalmations (1996). A 12th generation New Englander, Close grew up in Africa and Switzerland, but finished high school in the U.S. She studied acting at the College of William and Mary and made her New York stage debut in 1974. Her movie debut, playing Robin Williams's mother in The World According to Garp (1982), earned her an Oscar nomination. It was the first of a string of critically acclaimed performances during the 1980s, including four more Oscar nominations for The Big Chill (1983, with Jeff Goldblum), The Natural (1984, with Robert Redford), Fatal Attraction (1987, with Michael Douglas) and Dangerous Liaisons (1988, with John Malkovich). Close has had equal success on the stage and in television. She is the winner of three Tony Awards -- The Real Thing (1984), Death and the Maiden (1992) and Sunset Blvd. (1995) -- and has received many Emmy nominations (she won a Best Actress Emmy for 1995's Serving in Silence: The Margarethe Cammermeyer Story). Her other television work includes one season (2005) on The Shield (starring Michael Chiklis) and the lead role the 2007 series, Damages.The lithograph photo has been autographed on the front by Glenn Close.....BOTH PHOTO AND AUTOGRAPH ARE IN EXCELLENT CONDITION.......... 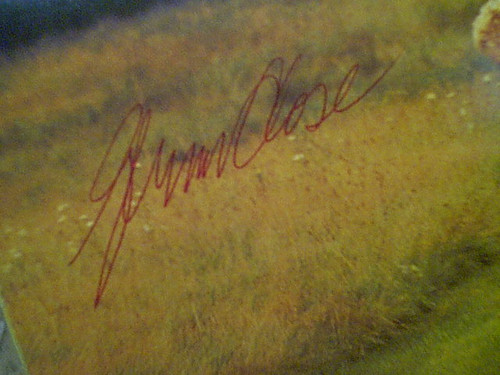