This item is a 12" X 19",color lithograph photo of musician George Clinton.The mastermind of the Parliament/Funkadelic collective during the 1970s, George Clinton broke up both bands by 1981 and began recording solo albums, occasionally performing live with his former bandmates as the P.Funk All-Stars. Born in Kannapolis, NC, on July 22, 1940, Clinton became interested in doo wop while living in New Jersey during the early '50s. He formed the Parliaments in 1955, based out of a barbershop back room where he straightened hair. The group had a small R&B hit during 1967, but Clinton began to mastermind the Parliaments' activities two years later. Recording both as Parliament and Funkadelic, the group revolutionized R&B during the '70s, twisting soul music into funk by adding influences from several late-'60s acid heroes: Jimi Hendrix, Frank Zappa, and Sly Stone. The Parliament/Funkadelic machine ruled black music during the '70s, capturing over 40 R&B hit singles (including three number ones) and recording three platinum albums.The color photo has been autographed on the front by George Clinton............BOTH PHOTO AND AUTOGRAPH ARE IN VERY GOOD CONDITION.BECAUSE THIS IS AN OVER SIZED PHOTO THERE IS A VERTICAL CREASE IN CENTER OF PHOTO WHICH DOES NOT AFFECT AUTOGRAPH. 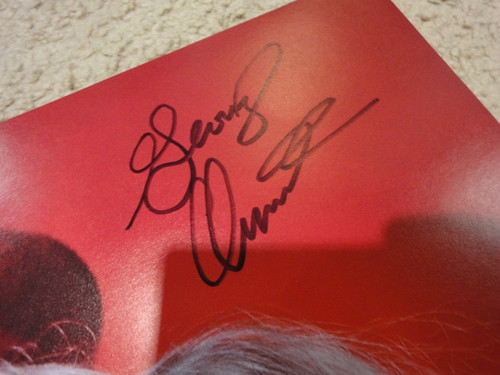