"Boxing Illustrated Wrestling News"-September 1965-Vol. 7-No.9-Champion Sports-67 pages. This vintage boxing magazine-which originally sold for fifty cents-features a color cover photo of Cassius Clay plus an article with photos.Muhammad Ali (born Cassius Marcellus Clay Jr.; January 17, 1942  June 3, 2016) was an American professional boxer and activist. He is widely regarded as one of the most significant and celebrated sports figures of the 20th century. From early in his career, Ali was known as an inspiring, controversial, and polarizing figure both inside and outside the ring.Cassius Clay was born and raised in Louisville, Kentucky, and began training as an amateur boxer when he was 12 years old. At age 18, he won a gold medal in the light heavyweight division at the 1960 Summer Olympics in Rome, after which he turned professional later that year. At age 22 in 1964, he won the WBA, WBC and lineal heavyweight titles from Sonny Liston in an upset. Clay then converted to Islam and changed his name from Cassius Clay, which he called his "slave name", to Muhammad Ali. He set an example of racial pride for African Americans and resistance to white domination during the 1960s Civil Rights Movement.The magazine has been autographed on the front cover by Cassius Clay with a fountain pen in black.................BOTH MAGAZINE AND AUTOGRAPH ARE IN VERY GOOD CONDITION. 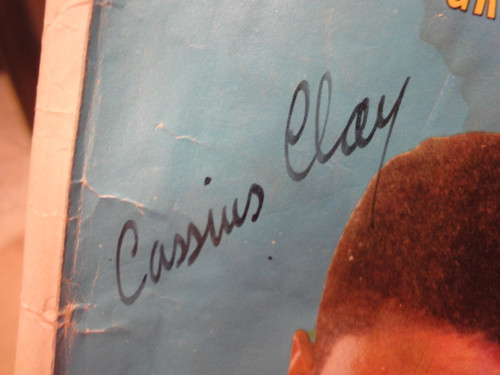