This item is an 8 1/2" X 10 1/2",black and white lithograph candid photo of President Bill Clinton.Bill Clinton was president of the United States for two terms, from 1993 to 2001, and is still best known as the president who survived impeachment after a sex scandal. Bill Clinton was born and raised in Arkansas. He earned an undergraduate degree from Georgetown University (1968), attended the Oxford University as a Rhodes Scholar (1968--1970) and then in 1973 earned a law degree from Yale Law School. While at Yale he met his future wife, Hillary Rodham; they were married in 1975. Bill Clinton spent the mid-1970s as a law professor, and in 1976 was elected Attorney General of Arkansas. Two years later he was elected the state's governor, becoming at age 32 the youngest governor in the country. Voters dumped him in 1980, but in 1982 he won reelection and he remained governor for the next decade. A moderate Democrat, Bill Clinton defeated the incumbent George Bush (the elder) for the U.S. presidency in 1992. His first term was characterized by a strong economic recovery, and in 1996 he beat Republican Bob Dole and was re-elected. His second term was dominated by scandal, with a focus on accusations of corruption and investigations into rumors of his marital infidelity. On December 19, 1998 the U.S. House of Representatives voted (along party lines) in favor of two articles of impeachment. Clinton was accused of committing perjury and obstruction of justice in his attempt to cover up an extra-marital affair with a White House intern, Monica Lewinsky. In the subsequent senate trial, Clinton was acquitted of the charges and remained in office. Days before leaving office, Clinton struck a deal with the office of the special prosecutor in the case: in order to avoid an indictment, Clinton admitted to making misleading testimony, and he was suspended from practicing law in Arkansas for five years. His wife, now Hillary Rodham Clinton, was elected as a U.S. Senator from New York in 2000, the first time a First Lady had ever been elected to public office. She was re-elected in 2006, then served as Secretary of State under President Barack Obama from 2009-13. She won the Democratic nomination for president in 2016, but lost to Republican Donald Trump in the general election in November.The lithograph photo has been autographed on the front by Bill Clinton.........BOTH PHOTO AND AUTOGRAPH ARE IN VERY GOOD CONDITION. 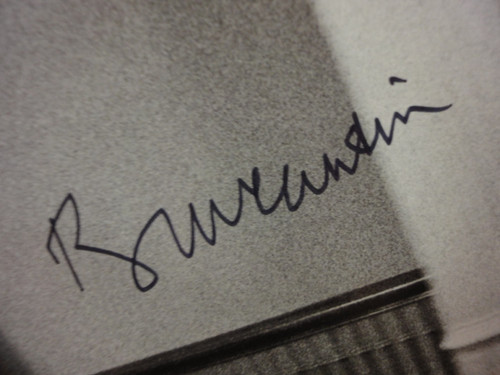