Wilt Chamberlain "A View From Above"-1991-Villard-6" X 9"-290 pages-Hardcover Book-With Jacket-With Photos-Signed By Author.Wilton Norman "Wilt" Chamberlain (August 21, 1936  October 12, 1999) was an American basketball player. He played for the Philadelphia/San Francisco Warriors, the Philadelphia 76ers, and the Los Angeles Lakers of the National Basketball Association (NBA); he played for the University of Kansas and also for the Harlem Globetrotters before playing in the NBA. The 7 foot 1 inch Chamberlain weighed 250 pounds as a rookie[1] before bulking up to 275 and eventually to over 300 pounds with the Lakers. He played the center position and is widely considered one of the greatest and most dominant players in NBA history.A hand signed cut signature by Wilt Chamberlain has been affixed to the title page of the book. The cut signature portion is approximately 1 1/2" X 2 1/2"...........BOTH BOOK AND AUTOGRAPH ARE IN VERY GOOD CONDITION. 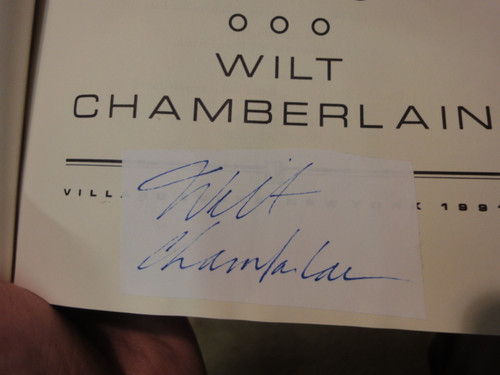