This item is an 8" X 11", black and white photo of South Korean President Park Chung Hee. Park Chung-hee (Korean: 박정희; 14 November 1917 – 26 October 1979) was a South Korean politician and army general who served as the leader of South Korea from 1961 until his assassination in 1979; ruling as a de facto military dictator from 1961 to 1963, then as the country's de jure third President from 1963 to 1979. Before his presidency, he was a military leader in the South Korean army, and was the second-highest ranking officer in the army. He first came to power after leading a military coup in 1961, which brought an end to the interim government of the Second Republic. After serving for two years as chairman of the military junta, the Supreme Council for National Reconstruction, he was elected president in 1963, ushering in the Third Republic. Seeking to bring South Korea into the developed world, Park began a series of economic policies that brought rapid economic growth and industrialization to the nation that eventually became known as the Miracle on the Han River. South Korea possessed one of the fastest growing national economies during the 1960s and 1970s as a result. The photo has been autographed on the front by Park Chung Hee..................BOTH PHOTO AND AUTOGRAPH ARE IN VERY GOOD CONDITION. 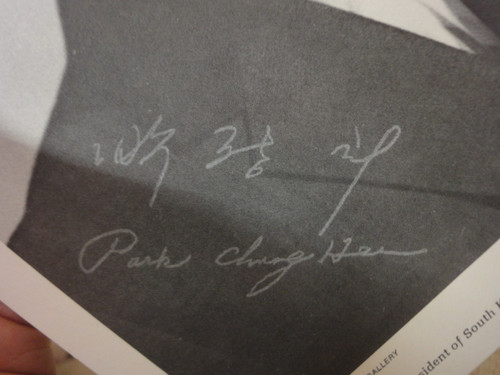