TV Guide Magazine-June 16,1962-28 pages. This vintage TV Guide Magazine features a color cover photo of Richard Chamberlain and Raymond Massey plus and article on "Dr. Kildare" with photos.Dr. Kildare is an NBC medical drama television series which ran from September 27, 1961 until April 5, 1966, encompassing a total of 190 episodes. The show, which premiered at the same time as an ABC medical drama, Ben Casey, quickly achieved success and helped spark a number of new shows dealing with the medical field.Kildare told the story of a young intern, Dr. James Kildare (Richard Chamberlain), working in a fictional large metropolitan hospital (Blair General) whilst trying to learn his profession, dealing with the problems of the patients, and winning the respect of the senior doctor, Dr. Leonard Gillespie (Raymond Massey).In the series' first episode, Gillespie tells the earnest Kildare, "Our job is to keep people alive, not to tell them how to live." Kildare ignores the advice, which provides the basis for stories over the next four seasons, many with a soap opera touch. The series was largely responsible for making Chamberlain, who beat 35 other contenders for the role, a teen idol in the 1960s. He also recorded a song, "Three Stars Will Shine Tonight," with the music from the show's familiar opening theme. In 2006 Chamberlain reprised the role in a parody of Grey's Anatomy (along with other famous TV doctors from Julia, St. Elsewhere, M*A*S*H and The Love Boat) on the 2006 TV Land Awards. The TV Guide has been autographed on the front by Richard Chamberlain and Raymond Massey.................BOTH TV GUIDE AND AUTOGRAPHS ARE IN VERY GOOD CONDITION................... 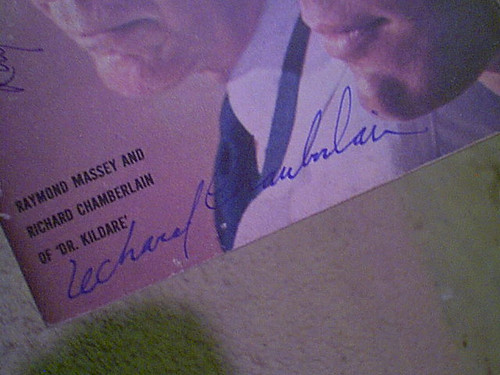