Marc Chagall-"Biblical Message"-1975-Fernand Hazan-France-Pette Encyclopedie De L'Art-4" X 6"-Softcover Bppk-Illustrated-Signed BY Marc Chagall.Chagall, Marc 18871985, Russian painter. In 1907, Chagall left his native Vitebsk for St. Petersburg, where he studied under L. N. Bakst. In Paris (1910) he began to assimilate cubist characteristics into his expressionistic style. He is considered a forerunner of surrealism. After some years in Russia, Chagall returned to France in 1922, where he spent most of his life. His frequently repeated subject matter was drawn from Jewish life and folklore; he was particularly fond of flower and animal symbols. His major early works included murals for the Jewish State Theater (now in the Tretyakov Mus., Moscow). Among his other well-known works are I and the Village (1911; Mus. of Modern Art, New York City) and The Rabbi of Vitebsk (Art Inst., Chicago). He designed the sets and costumes for Stravinsky's ballet Firebird (1945). Chagall's twelve stained-glass windows, symbolizing the tribes of Israel, were exhibited in Paris and New York City before being installed (1962) in the Hadassah-Hebrew Univ. Medical Center synagogue in Jerusalem. His two vast murals for New York's Metropolitan Opera House, treating symbolically the sources and the triumph of music, were installed in 1966. Much of Chagall's work is rendered with an extraordinary formal inventiveness and a deceptive fairy-tale naïveté. Chagall illustrated numerous books, including Gogol's Dead Souls, La Fontaine's Fables, and Illustrations for the Bible (1956). A museum of his work opened in Nice in 1973. His name is also spelled Shagall.The book has been autographed on the title page by Marc Chagall with a fountain pen in blue.....BOTH BOOK AND AUTOGRAPH ARE IN VERY GOOD CONDITION. 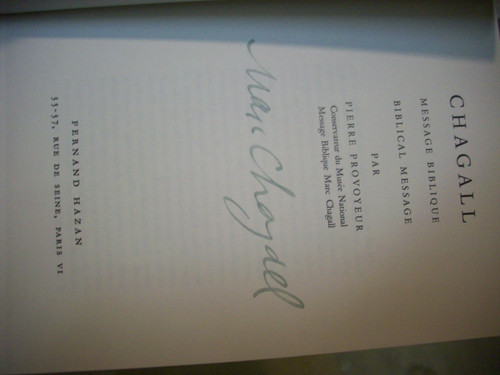