This item is an 8" X 10",black and white promotional photo for the 1967 movie-"Far From The Madding Crowd".Far from the Madding Crowd is a 1967 drama film adapted from the book of the same name by Thomas Hardy. It stars Julie Christie, Alan Bates, Terence Stamp, and Peter Finch, and was directed by John Schlesinger. It was Schlesinger's fourth film (and his third collaboration with Christie) and marked a stylistic shift away from his earlier works which explored contemporary urban mores. The cinematography was by Nicolas Roeg and the soundtrack was by Richard Rodney Bennett. Traditional folk songs were also used in various scenes throughout the film.The photo has been autographed on the front by Julie Christie and Terence Stamp............BOTH PHOTO AND AUTOGRAPHS ARE IN VERY GOOD CONDITION. 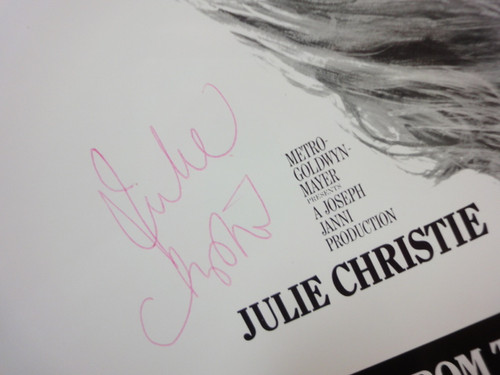