Original Soundtrack-"Charles Chaplin's A Countess From Hong Kong"(Decca 1501)-Sealed LP Including Souvenir Photo Album-BIography of Charles Chaplin.Sir Charles Spencer "Charlie" Chaplin, KBE (16 April 1889  25 December 1977) was an English actor, comedian, and filmmaker who rose to fame in the silent era. Chaplin became a worldwide icon through his screen persona "the Tramp" and is considered one of the most important figures in the history of the film industry.His career spanned more than 75 years, from childhood in the Victorian era until a year before his death at age 88, and encompassed both adulation and controversy....A Countess from Hong Kong is a 1967 British comedy film and the last film directed, written, produced and scored by Charlie Chaplin. It was one of two films Chaplin directed in which he did not play a major role (the other was 1923's A Woman of Paris), and his only color film. Chaplin's cameo marked his final screen appearance. The movie starred Marlon Brando, Sophia Loren, Tippi Hedren, and Sydney Earle Chaplin, Chaplin's second son.A piece of shrink wrap has been removed from the front cover and the LP has been autographed there by Charlie Chaplin with a fountain pen in black..............CONDITION OF RECORD IS SEALED.CONDITION OF AUTOGRAPH IS VERY GOOD. 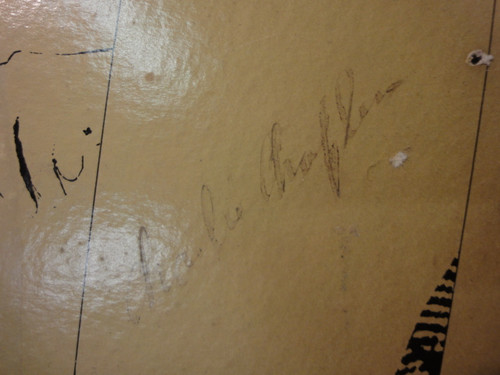