Jacques Levy-"Cesar Chavez-Autobiography Of La Causa"-1975-W.W. Norton-6" X 10"-546 pages-Hardcover Book-With Jacket-With Photos-First Edition-Signed By Cesar Chavez. Chávez, César Estrada 1927–93, American agrarian labor leader, b. near Yuma, Ariz. A migrant worker, he became involved (1952) in the self-help Community Service Organization (CSO) in California, working among Mexicans and Mexican Americans; from 1958 to 1962 he was its general director. In 1962, he left the CSO to organize wine grape pickers in California and formed the National Farm Workers Association. Using strikes, fasts, picketing, and marches, he was able to obtain contracts from a number of major growers. In 1966 his organization merged with the Agricultural Workers Organizing Committee of the AFL-CIO to form the United Farm Workers Organizing Committee of the AFL-CIO. Chávez also launched (1968) a boycott against the table grape growers, mobilizing consumer support throughout the United States. In 1972 the United Farm Workers (UFW), with Chávez as president, became a member union of the AFL-CIO. Chávez expanded its efforts to include all California vegetable pickers and launched a lettuce boycott, as well as extending his organizational efforts to Florida citrus workers. His successes in California were sharply diminished, however, as the result of a jurisdictional dispute with the International Brotherhood of Teamsters over the organization of field workers. In 1973 the Teamsters cut heavily into UFW membership by signing contracts with former UFW grape growers, but Chávez renewed the grape workers' strike. In 1977, the two unions signed a pact defining the types of workers each could organize. Membership in the UFW later fell, in part due to disputes between Chávez and his followers, some of whom accused him of nepotism. The César E. Chávez National Monument (est. 2002) commemorates his work. The book has been autographed on the title page by Cesar Chavez....................BOTH BOOK AND AUTOGRAPH ARE IN EXCELLENT CONDITION. 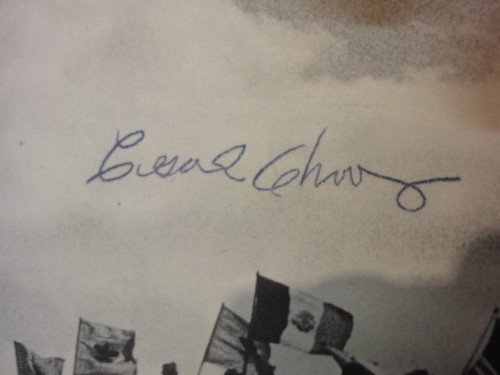