New York Magazine-June 22, 1981-116 pages. This vintage New York Magazine-which originally sold for $1.25-features a color cover of Mark David Chapman plus an article with photos. Mark David Chapman (born May 10, 1955) is an incarcerated American who murdered former Beatles member John Lennon in New York City on December 8, 1980. As Lennon walked into the archway of his apartment at The Dakota, Chapman fired five shots at Lennon from a few yards away with a Charter Arms Undercover .38 Special revolver. Lennon was hit four times from the back. Chapman remained at the scene reading J. D. Salinger's novel The Catcher in the Rye until he was arrested by police. He planned to cite the novel as his manifesto.Raised in Decatur, Georgia, Chapman had been a fan of the Beatles, but was incensed by Lennon's lifestyle and public statements, such as his remark about the Beatles being "more popular than Jesus" and the lyrics of his later songs "God" and "Imagine". In the years leading up to the murder, Chapman developed a series of obsessions, including artwork and the music of Todd Rundgren. The Catcher in the Rye took on great personal significance for him, to the extent that he wished to model his life after the novel's protagonist, Holden Caulfield. Chapman also contemplated killing other public figures, including Johnny Carson, Paul McCartney, and Ronald Reagan. He had no prior criminal convictions and had just resigned from a job as a security guard in Hawaii. Following the murder, Chapman's legal team intended to mount an insanity defense that would be based on the testimony of mental health experts who said that he was in a delusional psychotic state. He was more cooperative with the prosecutor, who argued that his symptoms fell short of a schizophrenia diagnosis. As the trial approached, he instructed his lawyers that he wanted to plead guilty based on what he had decided was the will of God. The judge granted Chapman's request and deemed him competent to stand trial. He was sentenced to a prison term of 20 years to life with a stipulation that mental health treatment would be provided.Chapman refused requests for press interviews during his first six years in prison; he later said that he regretted the murder and did not want to give the impression that he killed Lennon for fame and notoriety. He ultimately supplied audiotaped interviews to journalist Jack Jones, who used them to write the investigative book Let Me Take You Down: Inside the Mind of Mark David Chapman in 1992. In 2000, Chapman became eligible for parole, which has since been denied 11 times. The magazine has been autographed on the front cover by Mark David Chapman....................BOTH MAGAZINE AND AUTOGRAPH ARE IN VERY GOOD CONDITION. 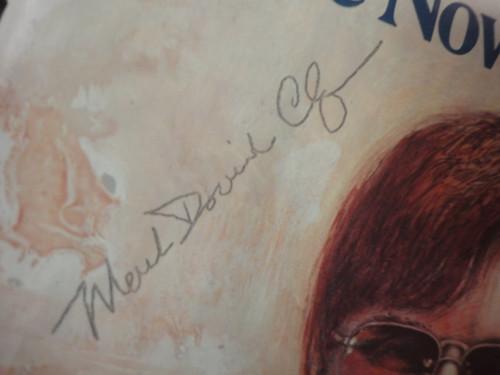