This item is a 8" X 10 1/2" black and white lithograph photo of the cast of "Charlie's Angels".Charlie's Angels is an American crime drama television series that aired on ABC from September 1976 to June 1981, producing five seasons and 110 episodes. The series was created by Ivan Goff and Ben Roberts and was produced by Aaron Spelling. It plotted the adventures of three females working in a private detective agency in Los Angeles, California, and initially starred Kate Jackson, Farrah Fawcett-Majors, and Jaclyn Smith in the leading roles. David Doyle co-starred as a sidekick to the three women and John Forsythe played the voice of their boss, Charlie. Later additions to the cast included Cheryl Ladd, who entered the series in season two, Shelley Hack in season four, and Tanya Roberts in season five.The lithograph photo has been autographed on the front by Farrah Fawcett Kate Jackson Jaclyn Smith......BOTH PHOTO AND AUTOGRAPHS ARE IN VERY GOOD CONDITION. 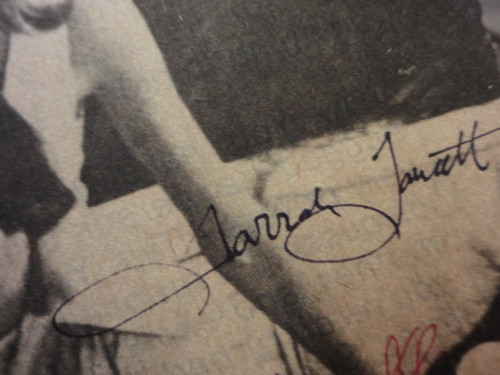