This item is an 8" X 10",color photo of actor Long Chaney  in the 1941 horror movie-"The Wolf Man'. This item is a color photo of the lobby card featuring the movie.......The Lobby Card was a form of advertising that revolutionized the look of graphics. Lobby Cards were sent out by the publicity departments of the Hollywood studios in sets of eight to twenty images reflecting the content of a newly released movie. Their purpose: to lure the movie-going public into theatres across the country......................The Wolf Man is a 1941 American horror film written by Curt Siodmak and produced and directed by George Waggner. The film stars Lon Chaney Jr. in the title role. Claude Rains, Warren William, Ralph Bellamy, Patric Knowles, Bela Lugosi, Evelyn Ankers, and Maria Ouspenskaya star in supporting roles. The title character has had a great deal of influence on Hollywood's depictions of the legend of the werewolf. The film is the second Universal Pictures werewolf film, preceded six years earlier by the less commercially successful Werewolf of London (1935). This film is part of the Universal Monsters movies and is of great cinematic acclaim for its production.......................Lon Chaney, Jr. was a movie and television actor from the 1930s to the 1970s, most closely associated with his starring role in the 1941 horror classic The Wolf Man. Born as Creighton Chaney, he was the son of silent film star Lon Chaney, but his father discouraged him from going into acting. Instead, Creighton went into the plumbing business during The Great Depression and failed; after his father died in 1931, he pursued a career as an actor. For marquee value, movie producers wanted him to go by Lon Chaney, Jr., and he reluctantly agreed after a few years of trying to make it on his own name. His first big break came in the 1936 movie The Singing Cowboy (starring Gene Autry). Over a screen career that lasted more than three decades, Chaney worked regularly, often as a villain and mostly in westerns and horror films. The horror films of Universal Studios made Lon Chaney, Jr. a star, first as Larry Talbot, the title character from The Wolf Man and many subsequent films. During his time with Universal, Chaney also played Frankenstein’s monster, the Mummy and Dracula. Chaney’s specialty was creating sympathy for movie monsters, thanks to his sad eyes and sometimes guileless and awkward demeanor. Lon Chaney, Jr. also made dozens of guest appearances on television shows of the 1950s and ‘60s, often in westerns as a bartender, broken down lawman or ruffian. His films included Jesse James (1939); One Million B.C. (1940); The Mummy’s Tomb (1942); The Ghost of Frankenstein (1942, as the monster); Son of Dracula (1943); Abbot and Costello Meet Frankenstein (1948); High Noon (1952, starring Gary Cooper); Casanova’s Big Night (1954, starring Bob Hope); The Indestructible Man (1956); The Defiant Ones (1958, with Sidney Poitier and Tony Curtis); and Welcome to Hard Times (1967, based on the book by E.L. Doctorow). The photo has been autographed by Lon Chaney.....................BOTH PHOTO AND AUTOGRAPH ARE  IN EXCELLENT CONDITION. 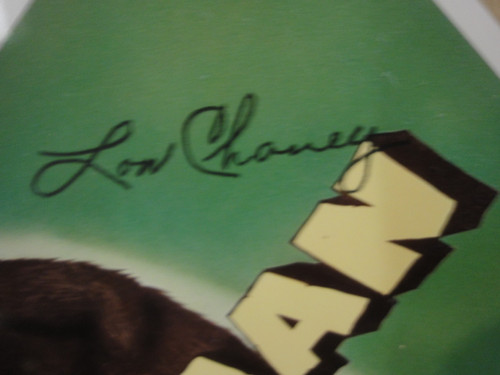