This item is an 8" X 8",color lithograph candid photo of author Truman Capote. The lithograph photo has been mounted on an 8" X 8" piece of photography paper.The author of Breakfast at Tiffany's (1958) and In Cold Blood (1966), Truman Capote was a successful writer whose flamboyant public persona sometimes overshadowed his literary reputation. He spent most of his early years in Monroeville, Alabama, then moved to New York City in 1933. Capote dropped out of school and went to work in the offices of The New Yorker while writing stories for other publications. His first novel, Other Voices, Other Rooms (1948), was a critical hit and Capote quickly became a star among New York's literati. During the 1960s he enjoyed both literary success and regular media attention, earning a reputation as a gossip-mongering partygoer with a quick and barbed wit. The international success of In Cold Blood furthered his celebrity and made him rich. Capote became a familiar face on TV (especially on Johnny Carson's show), instantly recognized for his diminutive frame and languid, lisping speech. By the end of the 1970s his health deteriorated due to alcohol and drug abuse, and he had worn out his welcome as the enfant terrible of New York's elite. Capote wrote essays, novels, stories and screenplays, and adapted some of his works for television and the stage. His books include The Grass Harp (1951), The Muses Are Heard (1956) and Music For Chameleons (1980).In the last years of his life, Capote lived for months at a time in the house of Johnny Carson's ex-wife, Joanne; in 2006 she held an auction of left-behind Capote memorabilia... In 2004 his unpublished first novel, Summer Crossing, was discovered; the work, long thought to have been destroyed, was published in 2005... Capote was sometimes called "the tiny terror"... The Broadway play Tru (1989-90) was based on Capote's life... Capote was a childhood friend of Harper Lee, who wrote To Kill A Mockingbird (1960); the character Dill is said to have been modeled on Capote... Capote is said to have dismissed the works of Beat authors such as Jack Kerouac with the comment, "That's not writing, it's typing." The lithograph photo has been autographed on the front by Truman Capote..............BOTH PHOTO AND AUTOGRAPH ARE IN VERY GOOD CONDITION.................... 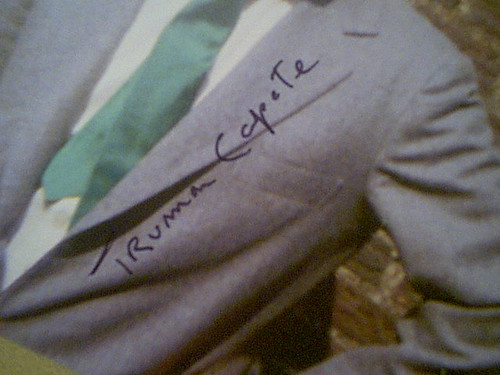