This item is a 9 1/2" X 13",color lithograph photo of actor Gary Tagawa in a scene from the Movie-"Space Rangers".The lithograph photo has been mounted on a 9 1/2" X 13" piece of photography paper.Although he had been interested in acting for many years, Tagawa did not become an actor until he was 36 years old. He made his feature film debut in The Last Emperor (1984) and went on to work steadily in feature films and on television. Many of his film appearances have been in the direct-to-video category. Still, Tagawa has managed to develop a devoted following and has at least one web site devoted to him on the Internet. As mentioned, Tagawa specializes in villains, but occasionally he plays different roles as he did in the much-honored independent drama Picture Bride (1994) in which he plays a sugar cane farmer who orders a Japanese mail-order bride 25 years younger than himself. The latter 1990s also found Tagawa's Hollywood work coming more frequently and in larger profile releases. After small roles in such films as Vampires (1998) and Snow Falling on Cedars (1999), Tagawa could be seen in such eagerly anticipated large-scale productions as Pearl Harbor and Planet of the Apes (both 2001).The photo has been autographed on the front by Gary Tagawa.................BOTH PHOTO AND AUTOGRAPH ARE IN VERY GOOD CONDITION..................................... 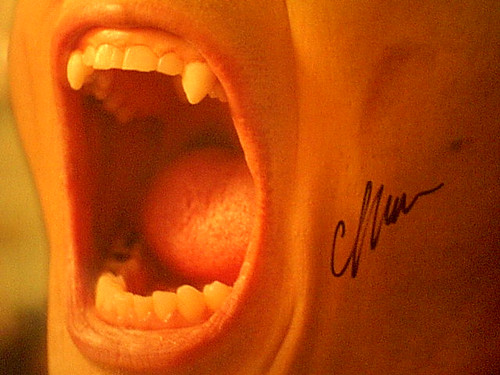