Esquire Magazine-May 1972-222 pages. This vintage magazine-which originally sold for one dollar-features a color cover photo of Sid Caesar plus an article with photos.Caesar, Sid, 1922, American comedian, one of the stars of the 1950s "golden age of live television," b. Yonkers, N.Y. While performing in a World War II military show he met the producer Max Liebman who, impressed with Caesar's comic abilities, later sponsored him in club gigs and had him host the television variety show Admiral Broadway Review (1949). In Your Show of Shows (195054) Caesar performed skits, improvisations, satire, doubletalk rendered in dialect, and monologues, often with Imogene Coca and Carl Reiner. The show's brilliant corps of writers included Reiner, Neil Simon, Mel Brooks, Larry Gelbart, and Mel Tolkin. Coca went on to her own television show, and Caesar returned with Caesar's Hour (195557). After the 1950s Caesar's television career was largely reduced to guest appearances. He also performed in a number of movies, including It's a Mad, Mad, Mad, Mad World (1963), Silent Movie (1973), and Grease (1978).The magazine has been autographed on the front cover by Sid Caesar..........BOTH MAGAZINE AND AUTOGRAPH ARE IN VERY GOOD CONDITION.FRONT COVER HAS A LITTLE WEAR. 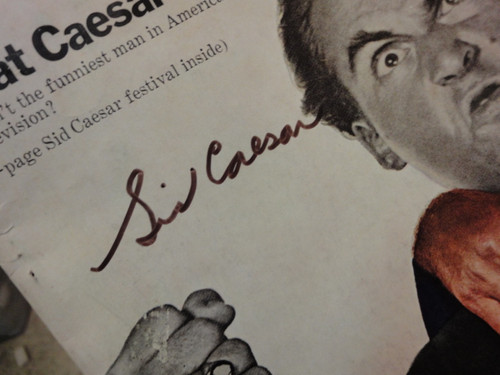