Life Magazine-May 18,1962-127 pages. This vintage Life Magazine-which originally sold for twenty cents-features a color cover photo of Scott Carpenter plus an article with photos.Scott Carpenter was one of the original astronauts of Project Mercury and the fourth American in outer space. Flying the Aurora VII spacecraft, Carpenter completed a five-hour, three-orbit mission on 24 May 1962, becoming the second American to orbit the earth (John Glenn had done it just a few months earlier). Carpenter joined the Navy's V-5 pilot program just at the end of World War II. After the war, he studied aeronautical engineering at the University of Colorado but didn't earn a degree. He re-entered the Navy in 1949, flew missions in Korea and then became a test pilot. Carpenter was selected in 1959 for Project Mercury, the ambitious space program that was described in the novel The Right Stuff. Carpenter's 1962 flight was dramatic: he overshot his target on re-entry by 250 nautical miles, and communications went silent for the last 40 minutes of his flight, which was broadcast live on radio and television. Carpenter wasn't only an astronaut, he was an aquanaut who did research for the Sealab program; he spent 30 days living underwater in 1965. He left NASA in 1967 and retired from the Navy in 1969, then started his own company, wrote two novels, developed diving equipment, lectured and made public appearances. He published a memoir, For Spacious Skies, in 2002.The Life magazine has been autographed on the front cover by SCott Carpenter...........BOTH MAGAZINE AND AUTOGRAPH ARE IN VERY GOOD CONDITION. 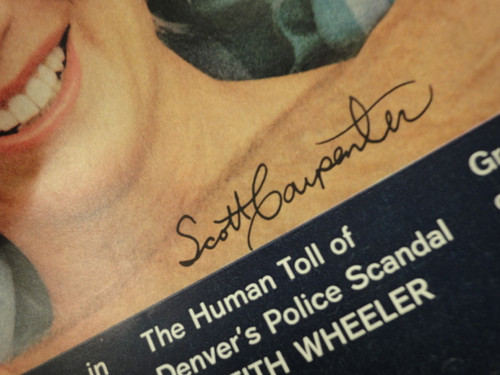