Capone, Al Alphonse Signed Autograph "The Biography Of A Self Made Man" Book Photo

Fred D. Pasley-"Al Capone The Biography Of A Self Made Man"-1930-5" X 8"-Garden City Pub-355 pages-Hardcover Book with Photo-Signed By Al Capone. Alphonse "Al" Capone was one of America's most famous gangsters during the years between the world wars. A Chicago-based crime boss, he was involved in illegal gambling, bootlegging (illegal alcohol), prostitution and more. Al Capone got his start in New York, working as a thug and bouncer (where he got the three scars that spawned his nickname, "Scarface"). He moved to Chicago in 1919 and quickly moved up in the ranks of Johnny Torrio's gang. Capone was known for his smarts and brutality, and by 1925 he was in charge of one of Chicago's biggest criminal gangs. It was Capone's men who gunned down seven rivals in 1929 in what was called the "St. Valentine's Day Massacre." Arrested many times over the years, Al Capone was famously pursued by federal agent Eliot Ness and ended up finally going to jail for income tax evasion in 1931. After serving eight years in federal prisons, Al Capone was released on good behavior (and because he'd been suffering from syphilis-related ailments). Capone retired to his estate in Florida and died in 1947 of heart failure.......PLEASE NOTE-As seen in the photo-the words "Chepalle!" and "Goombah" are written on the title page....This book has been hand signed by Al Capone...BOTH BOOK AND AUTOGRAPH ARE IN EXCELLENT CONDITION. 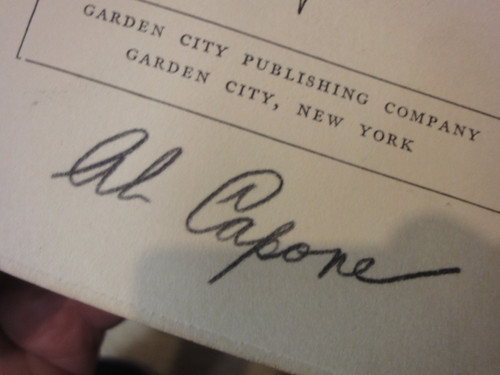 Capone, Al Alphonse Signed Autograph "The Biography Of A Self Made Man" Book Photo