"Sing You Sinners"-1930-Famous-Sheet Music.The 1916 Alice Duer Miller play Come Out of the Kitchen, previously filmed in 1921 with Marguerite Clark, was expertly transformed into early musical Honey. The story takes place in a poverty-stricken Virginia household, where blue-blooded brother and sister Olivia and Charles Dangerfield (Nancy Carroll and Skeets Gallagher) are reduced to renting out their mansion. Pretentious Yankee dowager Mrs. Falkner (Jobyna Howland) moves in with her spunky daughter Cora (Lillian Roth) in tow, while Olivia and Charles remain as servants. It isn't long before Cora has fallen in love with Charles, and Olivia has done likewise with Cora's former fiancee Burton Crane (Stanley Smith). The songs range from the self-spoofing "In My Little Hope Chest" to the lively "Sing You Sinners" (later used as a jazzy leitmotif in several Popeye and Betty Boop cartoons!) The Alice Duer Miller original was filmed again in 1934 as the British comedy Come Out of the Pantry and a fourth time in 1948 as Spring in Park Lane.The sheet music has been autographed on the front cover by Nancy Carroll with a fountain pen in blue. The sheet music has also been autographed on the front by Mary Simmons with a fountain pen in blue. Miss Simmons was Nancy Carroll's personal assistant for the movie.....BOTH SHEET MUSIC AND AUTOGRAPH ARE IN VERY GOOD CONDITION. 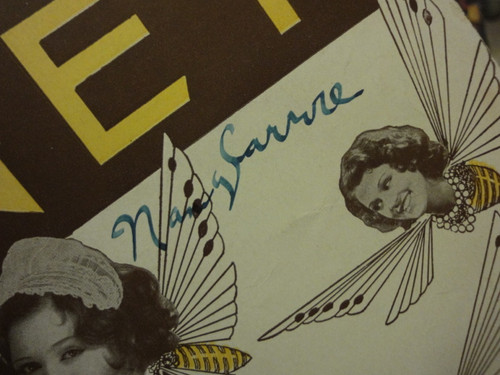