THIS IS AN AUTHENTICALLY AUTOGRAPHED SHEET MUSIC BY NANCY CARROLL AND SKEETS GALLAGHER... SING YOU SINNERS-FROM "HONEY"-WORDSA ND MUSIC BY W FRANK HARLING AND SAM COSLOW-STARRING CARROLL AND HARRY GREEN, LILLIAN ROTH, SKEETS GALLAGHER, STANLEY SMITH, AND MITZI GREEN-RELEASED IN 1930-PHOTO COVER IS SIGNED BY NANCY CARROLL AND SKEETS GALLAGHER- Creaky Broadway musical given a so-so treatment in Hollywood with Nancy Carroll starring as a woman who rents her house and masquerades as the cook. No real plot but some nice performances and one great song: Sing You Sinners. This is typical of early Hollywood musicals that were brought from Hollywood. There's nothing cinematic about it; it's basically the stage show filmed. So it makes for a stiff production with nothing redone for film. Jobyna Howland plays the imperious woman who rents the house; Lillian Roth is her daughter who falls for Skeets Gallagher who is posing as a butler. Stanley Smith plays the "hero," and Mitzi Green, Harry Green, and Charles Sellon co-star. But it's Howland who steals the show with her patented physical comedy and wild hair. Howland is best remembered as the "margaret Dumont" of several Wheeler and Woolsey comedies. CONDITION OF THE SHEET MUSIC AND AUTOGRAPHS IS VERY GOOD. 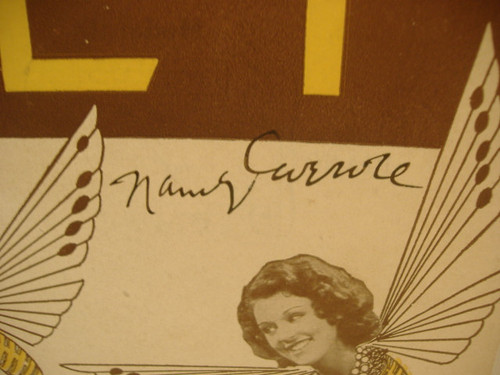