This item is a 10" X `13",black and white lithograph photo of actor Michael Caine.In the 1960s Michael Caine was a cocky young British movie star with a Cockney accent. He played a caddish womanizer in Alfie (1966) and starred as the dark hero Harry Palmer in the spy film The Ipcress File (1965) and two sequels: Funeral in Berlin (1966) and Billion Dollar Brain (1967). In the 1970s he was memorable in The Man Who Would Be King (1975, with Sean Connery) and he won a best supporting actor Oscar for his role in Woody Allen's 1986 movie Hannah and Her Sisters. As he matured into a wry and deeper older leading man, Caine won a second Oscar as the melancholy orphanage doctor in The Cider House Rules (1999, with Charlize Theron). He played Alfred, the butler and confidant of Bruce Wayne, in the movies Batman Begins (2005) and The Dark Knight (2008). Often a working-class hero in the movies, Caine is a famously hard worker in real life, having appeared in more than 120 films in the 50 years between 1958 and 2008. Caine was knighted in 2000 by Queen Elizabeth II. His autobiography What's It All About? was published in 1992.The lithograph photo has been autographed on the front by Michael Caine.........BOTH PHOTO AND AUTOGRAPH ARE IN VERY GOOD CONDITION. 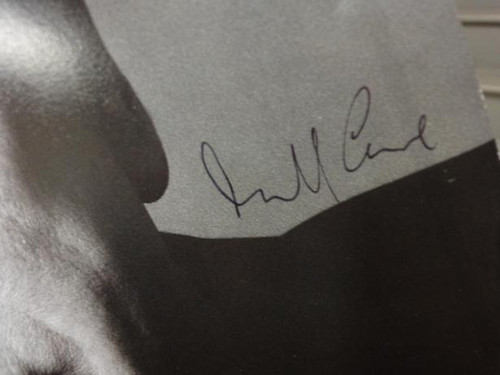