THIS IS AN AUTHENTICALLY AUTOGRAPHED SEALED LP BY MICHAEL CAINE AND JULIE WALTERS... MICHAEL CAINE AND JULIE WALTERS-EDUCATING RITA-RELEASED IN 1983-ORIGINAL SOUNDTRACK BY DAVID HENTSCHEL-(MERCURY MERL 23) LP HAS CUTOUT NOTCH IN UPPER LEFT CORNER. LP IS STILL SEALED IN ORIGINAL SHRINK WRAP WITH SMALL PIECE TORN AWAY FROM FRONT PHOTO COVER FOR AUTOGRAPHS BY MICHAEL CAINE AND JULIE WALTERS-CONDITION OF THE AUTOGRAPHS IS EXCELLENT. Educating Rita is a 1983 film of Willy Russell's play of the same name. It was directed by Lewis Gilbert and stars Julie Walters, Michael Caine, and Maureen Lipman with a screenplay by Russell. The original play is for two actors and is set entirely in Frank's office at the university; the filmed version includes a number of minor characters who are only talked about in the stage play and takes place in a number of locations. An English working-class girl wants to better herself by studying literature. Her assigned Open University professor, however, has long since openly taken to the bottle, and soon develops misgivings about her acculturation to academia. 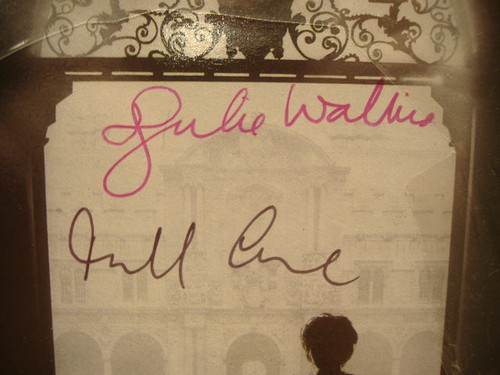