This item is an 8" X 10",black and white photo of actor John Carradine.Usually typecast as a villain, Carradine occasionally surprised his followers with non-villainous roles like the philosophical cab driver in Alexander's Ragtime Band (1938) and Abraham Lincoln in Of Human Hearts (1938). Throughout his Hollywood years, Carradine's first love remained the theater; to fund his various stage projects (which included his own Shakespearean troupe), he had no qualms about accepting film work in the lowest of low-budget productions. Ironically, it was in one of these Poverty Row cheapies, PRC's Bluebeard (1944), that the actor delivered what many consider his finest performance. Though he occasionally appeared in an A-picture in the 1950s and 1960s (The Ten Commandments, Cheyenne Autumn), Carradine was pretty much consigned to cheapies during those decades, including such horror epics as The Black Sleep (1956), The Unearthly (1957), and the notorious Billy the Kid Meets Dracula (1966). He also appeared in innumerable television programs, among them Twilight Zone, The Munsters, Thriller, and The Red Skelton Show, and from 1962 to 1964 enjoyed a long Broadway run as courtesan-procurer Lycus in A Funny Thing Happened on the Way to the Forum. Though painfully crippled by arthritis in his last years, Carradine never stopped working, showing up in films ranging from Everything You Always Wanted to Know About Sex But Were Afraid to Ask (1972) to Peggy Sue Got Married (1984). Married four times, John Carradine was the father of actors David, Keith, Robert, and Bruce Carradine. The photo has been autographed on the front by John Carradine.......................BOTH PHOTO AND AUTOGRAPH ARE IN VERY GOOD CONDITION.......... 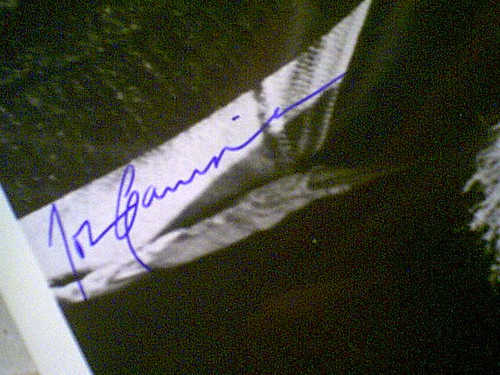