Joseph A. Califano-"The Triumph & Tragedy Of Lyndon Johnson The White House Years"-1991-Simon & Schuster-6" X 9"-396 pages-hardcover book-with jacket-with photos-Signed By Author. Joseph Anthony Califano, Jr. (born May 15, 1931) is as of 2005[update] the Chairman of the National Center on Addiction and Substance Abuse at Columbia University. He has held many posts in the United States Government including United States Secretary of Health, Education, and Welfare from 1977 until 1979. He is now one of only two living former secretaries of Health, Education, and Welfare (the other is his predecessor, Forest David Mathews). Califano graduated from College of the Holy Cross in 1952 and graduated from Harvard Law School in 1955. Califano held various legal positions in the United States Department of Defense, eventually becoming the general counsel of the United States Army. Califano was awarded the Distinguished Civilian Service Medal. In 1964, Califano became a special assistant to the United States Secretary of Defense, and deputy secretary. He was appointed to several committees by President of the United States Lyndon Johnson. In July 1965, he became a special assistant to the president, and served as President Johnson's senior domestic policy aide. He was called "The Deputy President for Domestic Affairs" by The New York Times. He served in that post for the remainder of Johnson's term. In January 1977, Califano was appointed Secretary of Health, Education, and Welfare by newly elected president Jimmy Carter. His major initiatives included prevention programs to support childhood immunizations and against smoking. The department began efforts to collect defaulted student loans.The book has been autographed on the title page by Joseph Califano...........BOTH BOOK AND AUTOGRAPH ARE IN VERY GOOD CONDITION................. 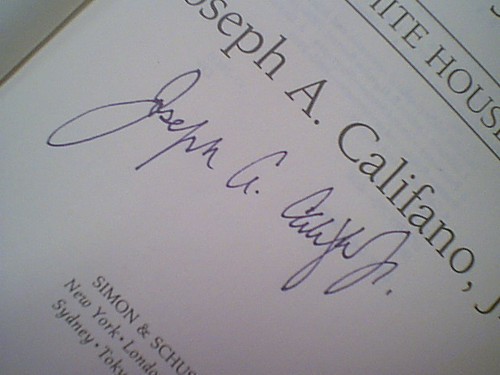