Playbill for The Belasco Theatre-1949-"The Madwoman Of Chaillot"-6" X 9"-32 pages-theatre program. This vintage Playbill features John Carradine in the 1949 Production of "The Madwoman Of Chaillot".The Madwoman of Chaillot (French title La Folle de Chaillot) is a play, a poetic satire, by French dramatist Jean Giraudoux, written in 1943 and first performed in 1945, after his death. The play has two acts and follows the convention of the classical unities. It follows an eccentric woman who lives in Paris and her struggles against the straitlaced authority figures in her life.December 1948January 1950 production at the Belasco and Bernard B. Jacobs theatres on Broadway. This featured Martita Hunt (playing the role of the Madwoman for over 350 performances and winning a 1949 Tony Award for her performance), and John Carradine as The Ragpicker.The PLaybill has been autographed on the front cover by John Carradine with a fountain pen in green........BOTH PLAYBILL AND AUTOGRAPH ARE IN VERY GOOD CONDITION......... 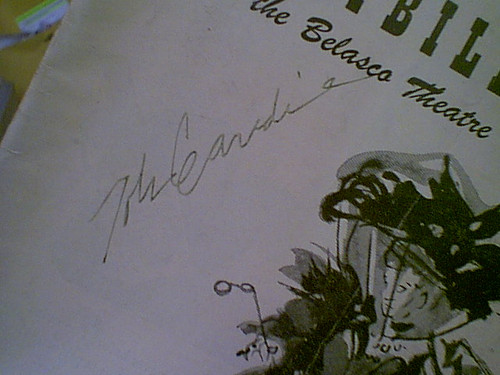