This item is a 7" X 9",black and white photo of actor James Cagney in a scene from the 1941 movie-"The Strawberry Blonde".The Strawberry Blonde is a 1941 Warner Bros. feature film directed by Raoul Walsh, starring James Cagney and Olivia de Havilland, and featuring Rita Hayworth, Alan Hale, Jack Carson and George Tobias. The picture was nominated for an Academy Award in 1941 for Best Scoring of a Musical Picture and features songs such as "The Band Played On", "Bill Bailey", "Meet Me in St. Louis, Louie," "Wait Till The Sun Shines Nellie," and "Love Me and the World Is Mine." The title is most often listed with the The, but the film's onscreen titles and all its posters and promotional materials call it simply Strawberry Blonde. Director Walsh remade the film in 1948 as One Sunday Afternoon.The photo has been autographed on the front by James Cagney with a fountain pen in blue..............BOTH PHOTO AND AUTOGRAPH ARE IN VERY GOOD CONDITION. 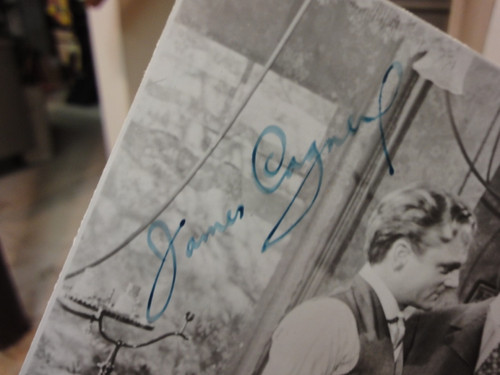