This item is a 3" X 5",black and white photo of actor Jack Carson from the 1940's.Actor Jack Carson was born in Canada but raised in Milwaukee, which he always regarded as his hometown. After attending Carroll College, Carson hit the vaudeville trail in an act with his old friend Dave Willock (later a prominent Hollywood character actor in his own right). Carson's first movie contract was at RKO, where he spent an uncomfortable few years essaying bits in "A" pictures and thankless supporting parts in "B"s. His fortunes improved when he moved to Warner Bros. in 1941, where after three years' apprenticeship in sizeable secondary roles he achieved his first starring vehicle, Make Your Own Bed (44); he was cast in this film opposite Jane Wyman, as part of an effort by Warners to create a Carson-Wyman team. While the studio hoped that Carson would become a comedy lead in the manner of Bob Hope, he proved himself an able dramatic actor in films like The Hard Way (43) and Mildred Pierce. Still, he was built up as Warners' answer to Hope, especially when teamed in several films with the studio's "Bing Crosby", Dennis Morgan. Continuing to alternate comic and dramatic (sometimes villainous) roles throughout the 1950s, Carson starred in his own Jack Benny-style radio series, appeared successfully as a stand-up comedian in Las Vegas, and was one of four rotating hosts on the 1950 TV variety series All-Star Revue. Carson was married four times (once to Lola Albright) Shortly after completing his role in the Disney TV comedy Sammy the Way Out Seal, Carson died of stomach cancer on January 2, 1963 (the same day that actor/producer Dick Powell succumbed to cancer).The photo has been autographed on the front by Jack Carson in blue fountain pen...BOTH PHOTO AND AUTOGRAPH ARE IN EXCELLENT CNDITION............... 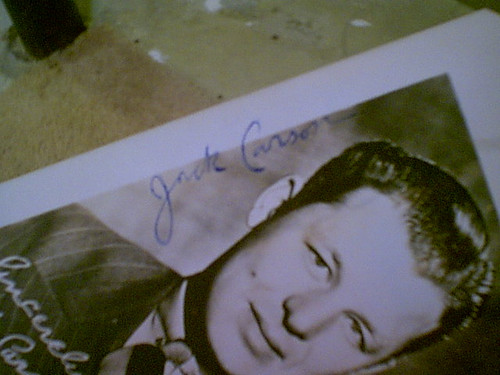