Catfish Hunter Signed Autographed First Day Cover 1990. James Augustus "Catfish" Hunter (April 8, 1946  September 9, 1999) was a professional baseball player in Major League Baseball (MLB). From 1965 to 1979, he was a pitcher for the Kansas City Athletics, Oakland Athletics, and New York Yankees. Hunter was the first pitcher since 1915 to win 200 career games by the age of 31. A member of five World Series championship teams, he was inducted into the National Baseball Hall of Fame in 1987. He is often referred to as baseball's first big-money free agent. Cover has been signed on the front by Catfish Hunter. Autograph and cover are in very good condition! 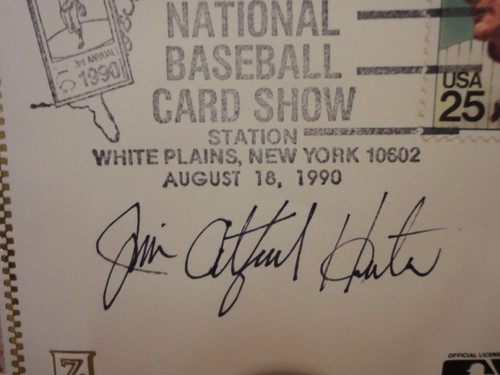