Carolyn Hester(Columbia 2032)-"This Life I'm Living"-LP. Some tracks include-This Life I'm Living,Brave Wolfe,East Virginia,I Loved A Lass plus more!Although Carolyn Hester's talent was tenuous, she was an important, if marginal, figure of the early-'60s folk revival, singing traditional material with a high voice in the manner of Joan Baez and Judy Collins (though with less command). She is also remembered for brief her musical associations with Bob Dylan, Buddy Holly, and Richard Fariña, as well as having her early albums produced by music legends Norman Petty (who had produced Holly), Tom Clancy, John Hammond, and John Simon. Some of her early- and mid-'60s work points, if only ever so slightly, in directions that would lead to folk-rock. Hester herself was unable to make it as a folk-rocker despite a brief try, and unpredictably went into psychedelic music for a couple of albums before largely drifting out of the business in the '70s and '80s. In the '80s, she was a mentor for budding talent Nanci Griffith (whose vocals have been compared to Hester's), and appeared on Griffith's Other Voices, Other Rooms album. The LP has been autographed on the front cover by Carolyn Hester.......CONDITION OF VINYL,COVER AND AUTOGRAPH IS VG. 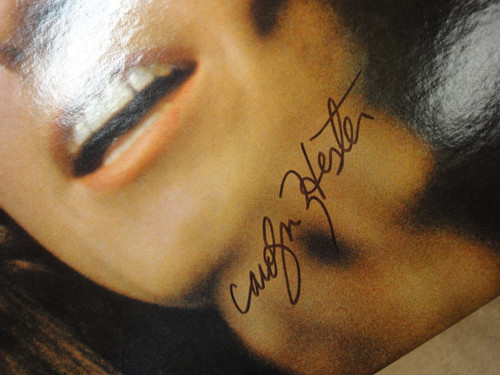