"I Want My Mammy"-1928-Shapiro Bernstein-sheet music.This song was performed by Eddie Cantor in the 1928 Musical Comedy-"The Midnight Rounders". The front of this rare sheet music features Eddie Cantor in blackface.Eddie Cantor (January 31, 1892 - October 10, 1964) was an American comedian, singer, actor, songwriter. Known to Broadway, radio and early television audiences as Banjo Eyes, this "Apostle of Pep" was regarded almost as a family member by millions because his top-rated radio shows revealed intimate stories and amusing antics about his wife Ida and five children.A year later, Cantor made his Broadway debut in the Ziegfeld Follies of 1917. He continued in the Ziegfeld Follies until 1927, a period considered the best years of the long-running revue. For several years Cantor co-starred in an act with pioneer African-American comedian Bert Williams, both appearing in blackface; Cantor played Williams's fresh-talking son. Other co-stars with Cantor during his time in the Follies included Will Rogers, Marilyn Miller, and W.C. Fields. He moved on to stardom in book musicals, starting with Kid Boots (1923), Whoopee! (1928) and Banjo Eyes (1940). Cantor began making phonograph records in 1917, recording both comedy songs and routines and popular songs of the day, first for Victor, then for Aeoleon-Vocalion, Pathé and Emerson. From 1921 through 1925 he had an exclusive contract with Columbia Records, returning to Victor for the remainder of the decade. Cantor was one of the era's most successful entertainers, but the 1929 stock market crash took away his multi-millionaire status and left him deeply in debt. However, Cantor's relentless attention to his own earnings in order to avoid the poverty he knew growing up caused him to search quickly for more work, quickly building a new bank account with his highly popular, bestselling book of humor and cartoons about his experience, Caught Short! A Saga of Wailing Wall Street in "1929 A.C. (After Crash)".Cantor also bounced back in movies and on radio. Cantor had previously appeared in a number of short films (recording him performing his Follies songs and comedy routines) and two features (Special Delivery and Kid Boots) in the 1920s, and was offered the lead in The Jazz Singer when that was turned down by George Jessel (Cantor also turned it down, so it went to Al Jolson), but he became a leading Hollywood star in 1930 with the film version of Whoopee!. Over the next two decades, he continued making films until 1948, including Roman Scandals (1933), Ali Baba Goes to Town (1937) and If You Knew Susie (1948).The sheet music has been autographed on the front cover by Eddie Cantor in blue fountain pen........BOTH SHEET MUSIC AND AUTOGRAPH ARE IN VERY GOOD CONDITION............................. 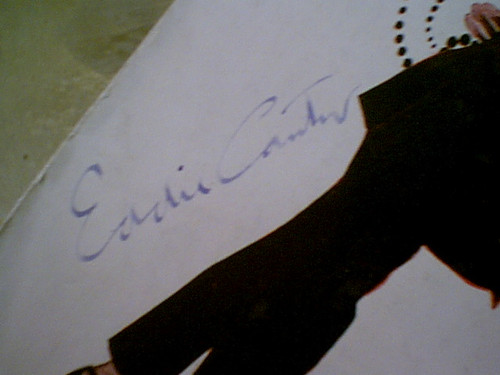