Eddie Cantor-"At The Baby Parade"-1932-Santly Bros-sheet music. This song was performed by Eddie Cantor and he is featured on the front cover of the sheet music in a great vintage photo with his wife and daughters.Entertainer Eddie Cantor, he of the "banjo eyes" and boundless hyperkinetic energy, was born on New York's Lower East Side to Russian-Jewish immigrant parents. Orphaned early on, Eddie was raised by his maternal grandmother Esther, who supported herself and her grandson as a door-to-door peddler. After winning $5 at a Bowery Theatre Amateur Night, the teenaged Cantor knew where his destiny lay. He lived a hand-to-mouth existence as a vaudeville performer, singing waiter, and blackface comedian in Gus Edwards' famous schoolroom ensemble act. Though moderately successful as a comic singer, Cantor didn't truly hit the big time until he was hired for Ziegfeld's Midnight Frolics in 1916. He stayed with the Ziegfeld Follies throughout the 1920s, and also starred in the producer's "book" shows Kid Boots and Whoopee. In addition to his expertly timed comic patter, Cantor achieved fame by introducing such songs as "If You Knew Susie," "Dinah," "Makin' Whoopee," and of course, "Ida," a paean to his wife of 49 years, Ida Tobias. After making his movie debut in a DeForest Phonofilm talking short subject in 1922, Cantor starred in a brace of enjoyable silent films, Kid Boots (1926) and Special Delivery (1927). His best Hollywood years were spent under contract to Samuel Goldwyn, where Eddie turned out one big-budget musical comedy per year between 1930 and 1936: Whoopee (1930), Palmy Days (1931), The Kid From Spain (1932), Roman Scandals (1933), Kid Millions (1934), and Strike Me Pink (1936). Unfortunately, most of his post-Goldwyn films seemed like hokey, outdated rehashes of his earlier films. Though his movie career faltered, Cantor remained popular throughout the 1940s on his long-running radio program, where he clowned with such stooges as announcer Harry Von Zell, violinist Rubinoff, and Bert "Mad Russian" Gordon. The offstage Cantor was not perfect, but most of the man's character flaws have been forgotten in the light of his inexhaustible work on behalf of dozens of charities, most prominently the March of Dimes. He also regularly put his career on the line through his union activities with Actors Equity, the Screen Actors Guild and the American Federation of Radio Artists, and flew in the face of bigotry and anti-Semitics through his work with the B'nai Brith and Jewish Relief. Though slowed down by a heart attack in 1953, Cantor kept his hand in whenever possible, even hosting a 38-week syndicated TV variety series, The Eddie Cantor Comedy Theatre. In 1953, Eddie Cantor was the subject of the Warner Bros. biopic The Eddie Cantor Story.The sheet music has been autographed on the front cover by Eddie Cantor with a fountain pen in blue................BOTH SHEET MUSIC AND AUTOGRAPH ARE IN VERY GOOD CONDITION.............. 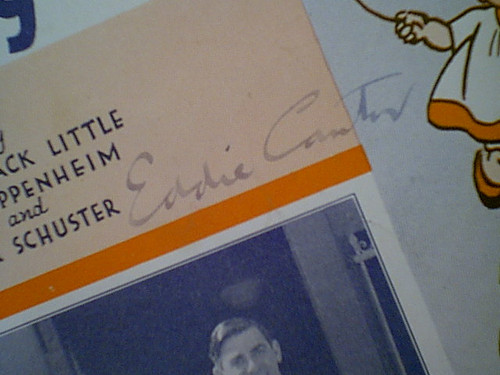