THIS IS AN AUTHENTICALLY AUTOGRAPHED PHOTO BY DICK CAVETT.. THIS IS A 8 INCH BY 10 INCH BLACK AND WHITE PHOTO SIGNED BY DICK CAVETT. HAS ORIGINAL DATED BYLINE. CONDITION OF THE PHOTO AND AUTOGRAPH IS VERY GOOD. Richard Alva "Dick" Cavett (born November 19, 1936) is an American former television talk show host known for his conversational style and in-depth discussion of issues. He and Johnny Carson are the only talk program hosts to be seen on a regular basis on United States national television in five consecutive decades, in Cavett's case the 1960s through the 2000s. (While Larry King has also had television talk programs in those decades, the programs he had in the 1960s and 1970s were limited to broadcast on local stations in Miami, WPST and WTVJ.) In recent years he has promoted DVDs of his former shows and has hosted replays of his classic TV interviews with Groucho Marx, Katharine Hepburn and others on Turner Classic Movies channel. 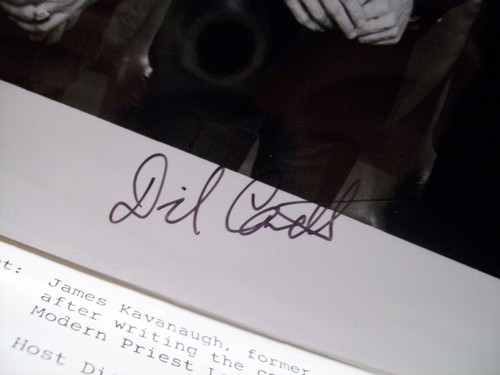