Playbill for the ANTA Theatre-1965-"The Royal Hunt Of The Sun"-6 1/2" X 9"-55 pages-theatre program. This theatre program features the 1965 production of "The Royal Hunt Of The Sun" starring David Carradine.The Royal Hunt of the Sun is a 1964 play by Peter Shaffer that portrays the destruction of the Inca empire by conquistador Francisco Pizarro.he Royal Hunt of the Sun had its first performances at the Chichester Festival, prior to its London opening at the National Theatre at the Old Vic in July 1964. It was directed by John Dexter and designed by Michael Annals with music composed by Marc Wilkinson and movement by Claude Chagrin. The cast was led by Robert Stephens as Atahualpa and Colin Blakely as Francisco Pizarro and included Oliver Cotton, Graham Crowden, Paul Curran, Michael Gambon, Edward Hardwicke, Anthony Hopkins, Derek Jacobi, Robert Lang, John McEnery, Edward Petherbridge, Louise Purnell and Christopher Timothy. The production was a success and in addition to its run at the Old Vic, it played at the Queen's Theatre, London and toured to Aberdeen, Glasgow, Stratford, Leeds, Oxford and Nottingham.The first Broadway performance took place at the ANTA Playhouse on 26 October 1965. The production by the Theatre Guild was the same as the original London production. In the cast were Christopher Plummer as Pizarro, David Carradine as Atahualpa and George Rose as Old Martin. The lighting design by Martin Aronstein marked the first time exposed lighting was used as an integral part of the design of a Broadway production. The play ran for 261 performances.The Playbill has been autographed inside the program on the credit page by David Carradine.......................BOTH PLAYBILL AND AUTOGRAPH ARE IN VERY GOOD CONDITION.PLAYBILL HAS ORIGINAL TICKET STUB.............. 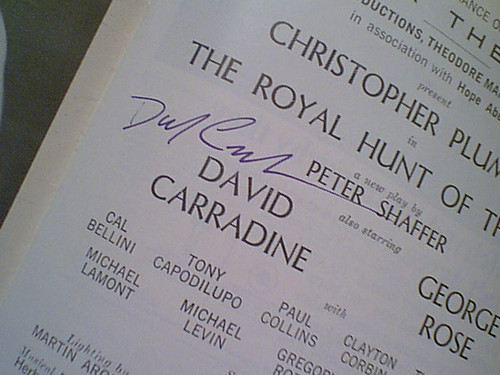