Life Magazine-July 8,1966-76 pages. This vintage Life Magazine-which originally sold for thirty five cents-features a full color cover photo of actress Claudia Cardinale-"Italy's busiest beauty takes a desert bath on location in Nevada". The magazine also features a five page article with photos on Claudia Cardinale-"She'd rather lose money than be a cliche".Emerging in the wake of Sophia Loren's international success, Claudia Cardinale was originally touted as Italy's answer to Brigitte Bardot; while never attaining a measure of global stardom comparable to either performer, she nevertheless proved herself a highly capable actress, working with many of the most renowned filmmakers in world cinema. After studying at Rome's Centro Sperimentale film school, she made her screen debut in 1958's Goha, followed by a larger role in Mario Monicelli's classic caper comedy I Soliti Ignoti that same year. In 1959 she was featured in Pietro Germi's Un Maledetto Imbroglio. Under the guidance of producer Franco Cristaldi (later to become her husband), Cardinale emerged as a major sex symbol; however, she also continued to appear with highly regarded filmmakers, including Abel Gance (The Battle of Austerlitz), Luchino Visconti (Rocco E I Suoi Fratelli), and Philippe de Broca (1962's Cartouche). In 1963, Cardinale received her widest exposure to date, playing herself  the object of star Marcello Mastroianni's fantasies  in Federico Fellini's masterpiece 8 1/2. That same year, she also appeared in Visconti's epic Il Gattopardo. Their combined success piqued Hollywood's interest, and in 1964 she co-starred in her first American production, Henry Hathaway's Circus World. She also appeared opposite Peter Sellers in Blake Edwards' The Pink Panther. The magazine has been autographed on the front cover by Claudia Cardinale with a fountain pen in red..................BOTH MAGAZINE AND AUTOGRAPH ARE IN VERY GOOD CONDITION.......... 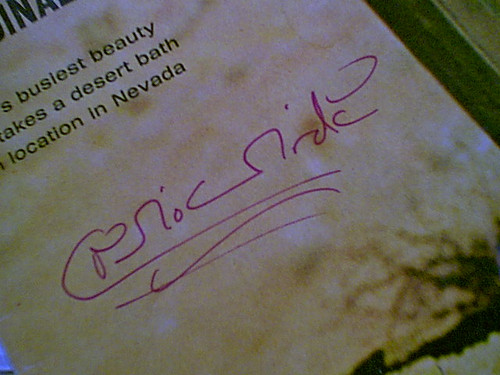